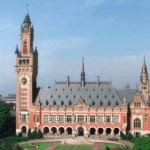 Seat of the International Court of Justice

“And this nation, for all its hopes and all its boasts, will not be fully free until all its citizens are free.“ (John F. Kennedy, television address, 11 June 1963)

The paradox inherent in the United States’ commitment to the values of justice, liberty, and democracy on the one hand, and the often unforeseen and problematic results of enforcing and/or imposing these values on the other, has shaped the nation’s history domestically as well as internationally since independence.

At a domestic level, the U.S. was one of the first nations in modern history to establish a democratic and egalitarian form of government based on the Enlightenment principles of equality, political and civil liberties, and freedom of speech. At the same time, many of these principles have had different meanings for different groups within the U.S. throughout its history, and have repeatedly led to violent internal racial, ethnic, gender, and class conflicts.

In the arena of foreign policy Theodore Roosevelt’s “Corollary to the Monroe Doctrine” (1904) , for example, officially consolidated the role of the U.S. as an “international police power,” prepared to intervene “in flagrant cases of . . . wrongdoings.” This set the stage for a wide range of interventions, including those in Latin America and, more recently, the Middle East, whose transgressive nature has since met with harsh criticism. Yet the U.S. engagement in Europe during and after WWII has equally thrown into relief the nation’s crucial role as liberator and international promoter of justice and democracy.

The EAAS 2014 conference on “America: Justice, Conflict, War” will be hosted in The Hague (The Netherlands), the “City of Peace and Justice” that is home to the International Criminal Court as well as the International Court of Justice. Bringing Americanists from across Europe and across the globe to this location highlights the fact that many of the challenges facing the U.S. today increasingly tend to be, as Madeleine Albright has remarked in a recent interview, reflections of complexly interrelated problems of global justice and international peace diplomacy that transcend the boundaries of individual nation states and render the importance of international cooperation more crucial than ever.

We invite workshops that address the topics of justice, conflict, war, from the perspective of any of the disciplines within American Studies. Potential workshop themes may include but are not restricted to: questions of justice, domestic conflicts or international wars from the (pre-)colonial times to the present, including relations to Native Americans, slave revolts, race, class, gender and religious conflicts; conflicts between labor and capital, WWI and II, the Cold War, Vietnam, the First Gulf War, Afghanistan, 9/11, Iraq, the war on terror, and the war on drugs; violent responses to immigration and the militarization of the U.S.-Mexico border; the past / present role of the U.S. in the international community (UN, International Court of Justice, International Criminal Court, NATO); representations of justice, conflict, war in literature, film, and other media; war as cultural misunderstanding; war trauma, etc. 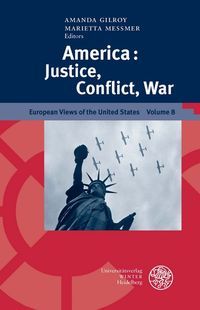 Reports from the workshops  (thanks to Tatiani Rapatzikou).